How the Pegasus World Cup may change horse racing

How to Get a Horse in the Epsom Derby

How the Pegasus World Cup may change horse racing

The Pegasus World Cup is an American thoroughbred flat horse race held at Gulfstream Park in Florida, United States of America. The racecourse is open to four-year-olds and up. The race is run over a distance of 9 furlongs on a dirt surface. The winning purse is 3 million dollars.

The race was inaugurated in January 2017 and had been running ever since. Frank Stronach came with the idea of this horse racing event in 2016. And just in a year, it happened for the first time in 2017. Bob Baffert, a famous American horse trainer, was fond of the idea.

What makes the Pegasus World Cup unique is that it allows owners to buy into the race for a million dollars. This makes the race more exclusive and gives the owners a sense of ownership. In addition, it also offers a chance to compete for a much larger purse than most other horse races.

Since its inception in 2017, the Pegasus World Cup has quickly become one of the most anticipated horse races of the year. The race is unique in that it offers a purse of 3 million dollars, which is more than any other horse race in North America. And while the purse is undoubtedly a draw for many horses and their owners, the natural appeal of the Pegasus World Cup may be its potential to change horse racing as we know it.

The Pegasus World Cup was created by Frank Stronach, who recognized that horse racing needed an event that would appeal to a new generation of fans. The racecourse is open to horses aged four and up, and the race is run over of 9 furlongs on a dirt surface, so it is easy enough for most horses to adapt.

The inaugural Pegasus World Cup was held on January 28th, 2017, with nine horses competing. It took place at Gulfstream Park in Florida and was captured by a team of spectators – many of which were Millennials – that used a 360° camera. The result was a video that offered viewers a truly unique perspective into the world of horse racing – one they could control as if they were riding along on the back of the racehorse themselves.

The first Pegasus World Cup happened in the year 2017 on January 28th. With a winning purse of as big as 12 million dollars. An event like this could change everything. Top jockeys, horses, and trainers worldwide came to participate in an event as big as this. The stage was set for a fantastic event at the Gulfstream Park in Florida. The horse that came out on top was Arrogate, trained by the famous Bob Baffert. The jockey who rode the horse to glory was Mike Smith to claim a purse of 12 million dollars.

In the 2018 Pegasus World Cup, the winning purse was increased remarkably to 16 million dollars. The event gathered more attention, and many other famous trainers and jockeys participated. The winning horse was Gun Runner, rode by FlorentGeroux and trained by the famous Steven Asmussen. That year there were a total of 12 entries.

In 2019, the winning purse was reduced to 9 million, and the winning horse was the City of Light, trained and ridden by Michael W. McCarthy and Javier Castellano, respectively.

A year later, the Pegasus World Cup took place on January 25th. The winning horse named Mucho Gusto was trained by Bob Baffert. It was Baffert’s second win, as he also won the event back in 2017 when it was played for the first time. The winning jockey was the famous Irad Ortiz Jr to claim a winning purse of 3 million dollars.

In 2021, the event took place on January 23rd. There were a total of 12 entries that year and the winning horse was Knicks Go, trained by Brad H. Cox. The winning jockey was the famous Joel Rosario, who claimed the 3 million winning purse.

New technology has been integral to the success of not only the Pegasus World Cup but also all other Stronach Group initiatives as well. Attendance numbers increased exponentially following the addition of items such as high-tech betting terminals and large video screens. 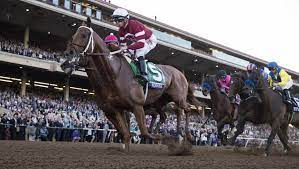 The Pegasus World Cup is not only changing the way that horse racing is being watched, but it is also changing how horses are being bred. Owners and trainers are now looking for horses that can compete in this race, and as a result, the quality of the field has been steadily increasing.

While there are still some who argue that the Pegasus World Cup lacks the tradition of other horse races, it’s hard to deny that this event is paving the way for a new era in horse racing. With more money on the line than ever before and ever-improving technology, we can only expect the Pegasus World Cup to get even bigger and better in years to come.

There’s a lot of hype surrounding the Pegasus World Cup. The atmosphere is electric as well as the betting. People from all over the world attend this event because they know that it has something for everyone. There are opportunities to win big, but there are also opportunities for vacationers who want to spend their weekends attending the event. The Pegasus World Cup attracts many celebrities and other famous personalities who love spending time at Gulfstream Park.

All in all, horse racing is generally a fun hobby that people get into it for multiple reasons. Some people are simply attracted to fast horses, while others find joy in watching them race around the track or place bets on which horse will be victorious. There’s something about standing in the crowd with thousands of other people, cheering on your chosen entry only to watch as they thunder past you to claim victory. For some, it can almost feel romantic being able to share this experience with so many fellow enthusiasts.

It should be noted that the Pegasus World Cup is not the only horse race in the world. It’s just one small part of a larger industry. However, what makes this particular event so unique is the high stakes that are involved. Horse owners and trainers are willing to spend millions of dollars to win this race, and as a result, the competition is fierce. The Pegasus World Cup has quickly become known as the most important horse race in the world, and there’s no telling how big it will get in years to come.

The Pegasus World Cup is the new “Super Bowl” of horse racing. An event that is changing how horse racing is watched and breeding horses. With more money on the line than ever before, this race will only continue to get better. This year’s race is sure to be even more exciting.

The Pegasus World Cup is changing horse racing as we know it. It has raised the stakes for horse owners and trainers and created a more exclusive race. The race is attracting some of the best horses in the world and is sure to become even more popular in years to come. If you want to witness this amazing event in person, be sure to get your Pegasus World Cup tickets today at pegasusworldcup.com.

Pacific Classic Stakes is an American Grade I horse race for thoroughbreds. It was inaugurated in 1991 and has been run every year since. The event is the Del Marc Race track situated in California. The racecourse is open to three-year-olds, and the race is run on a dirt surface over a distance of 10 […]

Horses in Minecraft are an excellent way to get around faster and explore more, but they can be challenging to tame without a saddle. You can find wild horses in many different biomes and tame them with food. The most common types of horses you will encounter are the Tamed Horse and Brown Horse, which […]

Bob Baffert is one of the most successful horse trainers in America. He has won the Kentucky Derby three times, with American Pharaoh, Justify, and Arrogate. His horses are all stars-Arrogate is the last horse to win both the Dubai World Cup and Japan’s prestigious Tokyo Yushun. What makes Bob Baffert so successful as a […]

No comments to show.

Powered by WordPress | WP Magazine by WP Mag Plus